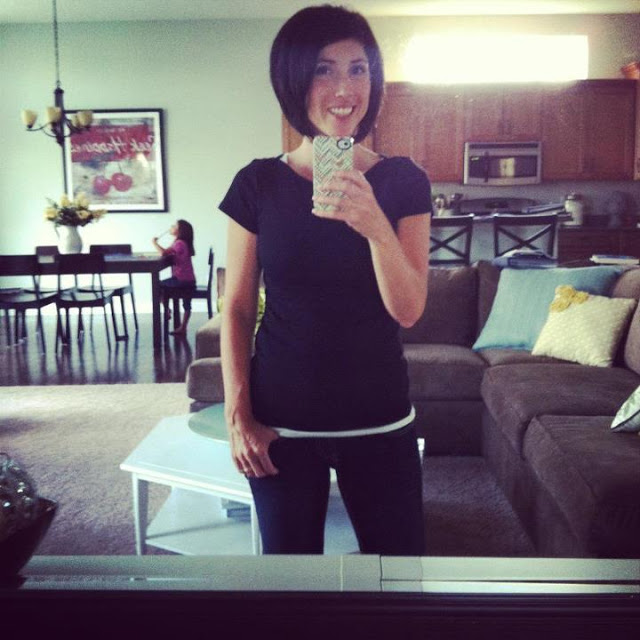 the other day i took a picture of my new hair cut with my phone and gave a sneak peek of my third time is the charm painted house and put it on instagram and  Facebook.

today while i was trying to set my camera and was checking lighting to take a picture of a project, i snapped this picture:

i looked at it and realized i’ve not taken pictures of my house in a loooooooong time.

we’ve been here already a year and some, and i think it’s because i haven’t really done anything exciting to it, i’ve not put up many things on the walls, and i have so many things i want to do to it…that i just didn’t think it was worth a blog post to talk about it.

but really it comes down to this:

i could just post it on either of the other social medias and all you have to do is click “like” or double tap on the picture to give me a heart.

i think before it was much easier to post a few pictures and talk about it on my blog because before i didn’t have all the other social media networks that i have that are much quicker than a whole blog post. anyone else feeling this way?

it’s cool, but sad all at the same time.

i want to take pictures again, i want to do a whole blog post on how i put up three pictures and added a plate to the wall, and not feel like i’ve just wasted everyones time because “hello…didn’t you know you could just post it on facebook or instagram?” yeah i know. dumb.

k so here we are.

lets talk about what i want to do to the house: 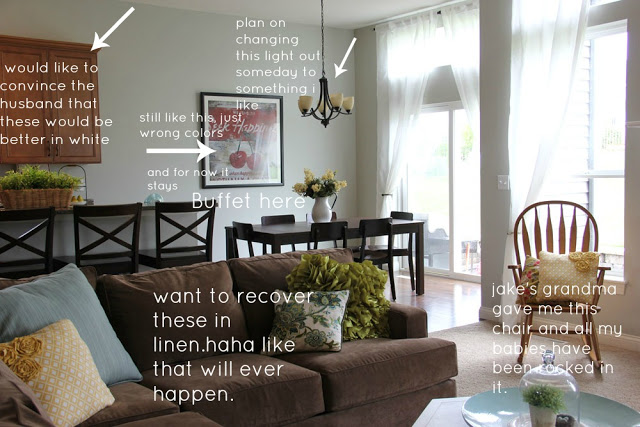 this house is new. so of course i can’t really justify a lot of changes because…well everything works well, somethings are not my taste, but hey not a huge deal. so here are a few things i’d like to put in the category of “if i had money to waste i would do this with it”:

first i would change out the light fixtures. i would die for  this one. okay maybe not die. but i would feel like it would be the best fit. but for the $400 price tag. eh.

so this one is a good fit as well. and especially for the price…well compared to the first one at least.

then i’d like to have white cabinets. yes, i would. even when they will be not the coolest thing in the world to anyone else, they will be to me. i like white cabinets. BUT they are brand new, and not just standard stuff you can buy at home depot, these are are really nice more custom-y… so they stay.

also i would to place a nice chair in that corner where the rocking chair is. but it can’t be huge, and it has to be super basic so i can change colors if i ever want to.

along with the new chair, i would love to make a linen cover for my sectional. pretty sure hell is going to have to freeze over before that one happens so, the plain brown sectional works great.

and last but not least i want a buffet. over by my dining table. i think it would be beautiful to have one there, but of course the ones i’m looking at are in the $1000+ range…and yeah, i’m too cheap of a person to do it. sooooooooooo, craigs list, and goodwill i will continue to frequent in hopes that one day i will find her. 🙂 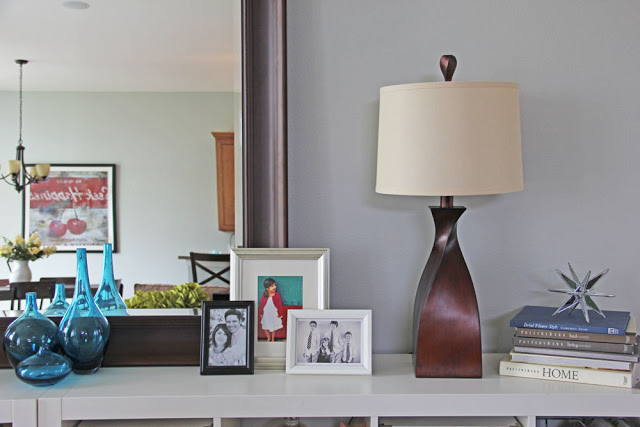 the color on the walls are aloof gray by sherwin williams. this is the third time this house has been painted in about a years worth of time. it was painted what i like to call “Iowa brown” because everyone has this color on their walls it seems. well they do if they are buying homes with the builder we bought from and they build a lot of houses here. so yeah apparently this brown is popular, but i didn’t care, didn’t like how dark it was. and it kind of made me grumpy. yup, apparently i’m all about looks. >:/

so we lived with it for about 6 months. and we (actually the husband) decided for the sake of our marriage, i would not make the him paint.

keep in mind before we left utah he repainted the town house (white because it would go best with everything we had hodgepodged out while we lived in a storage unit till we sold it and i figured people could look at it as a clean slate). he painted that last house we had bought right before his company announced they were closing their doors, he painted the smurf house (and honestly anyone that painted that house alone should never have to paint again).

so as you can see he has EVERY right to say no to my wanting to change the paint color.

so when i asked a painter to paint, i thought maybe he could give me some heads up on colors. all the ones he picked where darker than the brown already on the wall. so i went to work on picking it out myself.

talk about an anxiety attack just waiting to happen. holy crap. one thing is to pick the wrong color and tell the husband “hey, so haha funny, i think i hate it lets go try another color.” and another thing is to hire someone and pay three times if not more what it would have cost you to bully your husband into doing it one more time.

so, okay.  i knew i wanted a lighter color and i knew i liked gray but i needed a color that would not change purple in the light. and the main reason why i didn’t go with gray the first time around was for this same reason. i loved the gray we did in our last house but in the evenings it always turned a pretty shade of periwinkle (i said never). i didn’t want to make the same mistake for like my WHOLE house.. so i went with safe beige.

which was the worst mistake like ever. no i mean it, it was horrible.

for some reason it turned peach the minute it got up on my walls. i cried as i turned the corner of the main area when the painter was done. he didn’t know how to take my reaction. all he said was

“it’s not peach everywhere” which made it even worse because i didn’t even say i didn’t like it because it was peach!

you can see just a little of it here 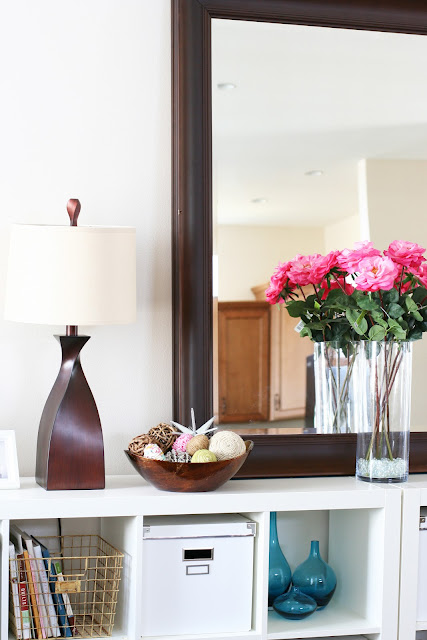 okay well i guess you cant see it that well. but if you look in the mirror the light does something to the walls and it looks peachy yellow. just ask ANYONE (except my husband who will say on his death bed that it was beige, ahem, because he pushed for that color in the first place) and they will tell you.

so when the husband came home and i was like “it’s all peaches and cream crap!”  he was like “you are nuts. its fine, it looks better than the other paint color. it will be fine.”

for 8 months i tried to live with it, and for 8 months the husband would say “my that’s a nice shade of beige” and i would banter back “you mean peach.”

it was funny but not.

anywho, a friend (or two or three) got tired of hearing me complain, so one of them said “pick out your paint, and we’ll paint this week, i don’t like your peach either.” okay.

so i couldn’t commit to buying 5 gallons of mistake again so we started with my bedroom it went from this: 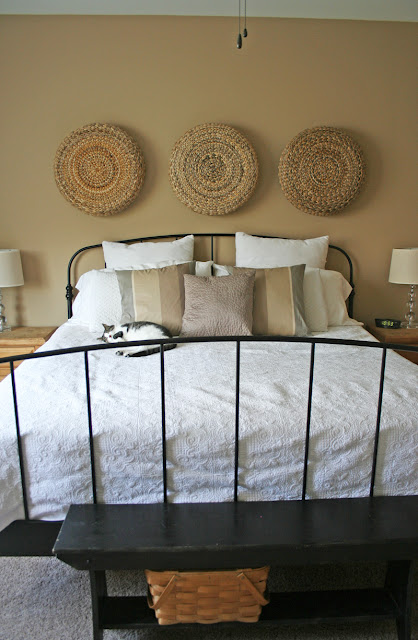 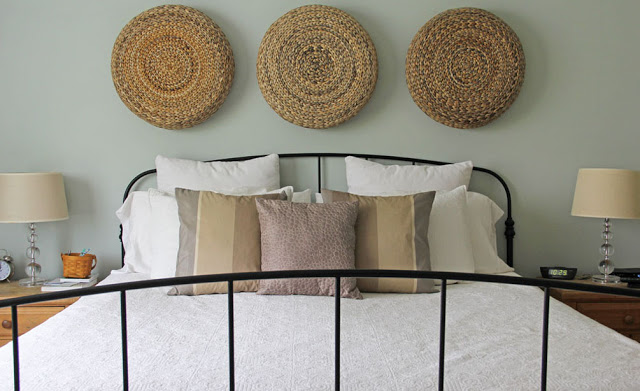 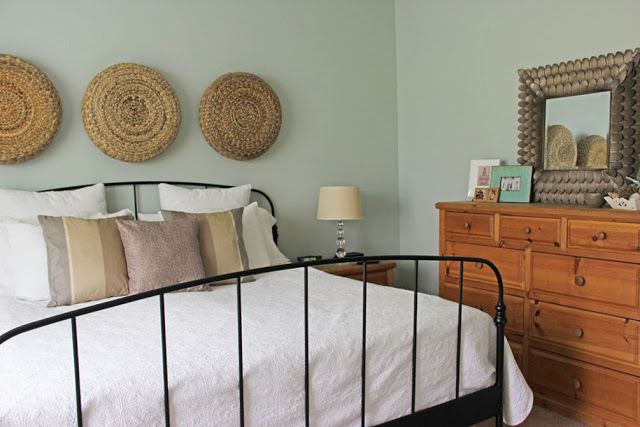 the husband came home and said he liked the “green” on the walls, i said it was “bluish green” there’s a difference. he called me nuts again.

but he saw how happy it made me, and how calming the color is.

and we started to paint it together.

i have a good man by my side.

oh and i love the paint.

it doesn’t turn purple, it turns a sort of light slate blue in the evenings.

and now i think i can start decorating.

now if we could just get the right shade of color to make the economy all better the world would be a happy place.