so you want to know about the token system… 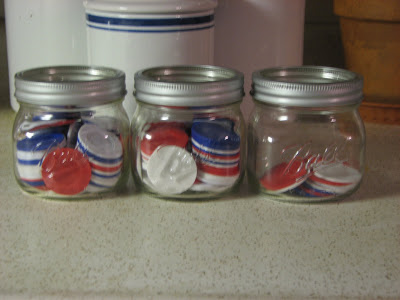 well one of the benefits of being married to a marriage and family therapist is that he’s got a lot of training in conduct disorders, and such…soo when we were having major issues with nate at school (wouldnt do any work, i mean absolutely nothing at school, homework was a fight, i was usually in tears by the end of it, and he actually had his teacher in tears a few times) he introduced me and his teacher to the token system. after 2 and half months of doing it, nate comes home with his daily report with “excellent” more often than not, but it was a bumpy road to get to this point. here are some of the things that we do:

**EVERYTHING costs tokens: tv, computer, toys, chocolate milk, extra time up, (playing with friends is not something that costs for nate cause he’s struggling in this area), buying new toys.

*1/2 hour of tv watching costs 5 tokens, also goes for the computer. if they want an hour it costs 10 tokens…

*chocolate milk costs 5 tokens, apple juice does too (milk and water are free)

*if i have to clean up their room it will cost them 10 tokens each. (this one encourages them to work together)

*cookies, sweets, or snacks (not including fruit) cost 3 tokens.

theres more but i think you get the point…

HOW TO EARN TOKENS:

-for ryan its 10, (he’s in kindergarten and it’s half day so he only gets half)

*randomly i give out tokens for nice behavior, or nicely playing with each other, being kind, being helpful, playing quietly, and so forth. i do it randomly because this enforces the good behavior all the time, not just when they want tokens.

now here’s the disclaimer: it was HELL the first 2 weeks. kids were complaining that they didn’t have to “pay” for everything. but i stuck to it, and now almost going onto our third month of this, we go days without watching tv…yeah you read it right, DAYS WITHOUT TV. i thought i was going to go mad at first, i kept asking the kids if they wanted to pay for tv, or something…but they started to realize that they wanted some things more than others, and for them playing nicely without having to pay for it was better than wasting 5 tokens for half an hour of tv. and now when the tv is on, it sounds “wrong” or something.

now i also have to add that nate was the hardest on me with the system, he just rebelled, said he didnt care that he didnt have tokens, and would just still give me a hard time. he didnt really have much to loose because he wasnt earning anything. but when he noticed that his brothers were able to eat a cookie or ask for chocolate milk, and play with their beloved “star wars troopers” (they cost 10 tokens, but if they all have an excellent day they don’t have to pay for it, and they get their max tokens for the school day) after about 3 weeks he would have a “good” day here and there, and now we actually have an average of 3 to 4 excellent days so they’ve been happily playing with their most favorite toys! okay this is getting long so if you have any more questions just let me know.