a conversation if you will… 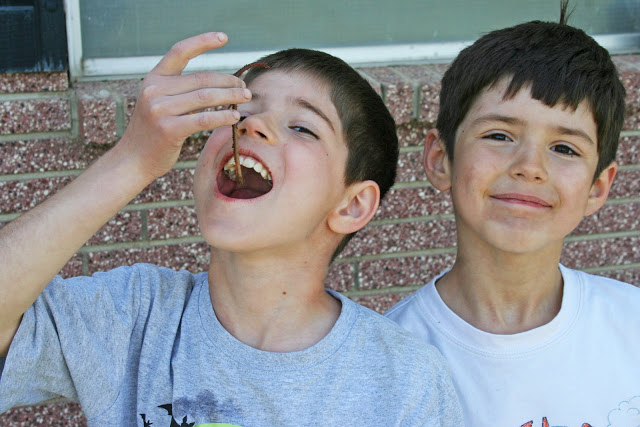 so i read to the boys every night. (well most nights) and we’ve covered a wide range of books from star wars to classics. we just finished not too long ago “how to eat fried worms.”

we were working outside fixing a busted pipe in the sprinkler system, when i spotted a big worm…and well here’s a little conversation if you will:

husband: (watching the exchange decides to chime in ) yeah it’s not that bad. it just tastes like dirt.

me and the boys stare at him in disbelief…

husband: what? oh what? you never ate a worm before?

husband: (big grin on his face) yeah, i was a brave kid.

husband: bends over stares right at me and takes the worm and EATS IT.

me: AHHHHH! GROSS i have to kiss you!

both husband and i look over to the two older boys because it got reeeeal quiet.

both boys with stars in their eyes say: OH MY GOSH DAD YOU ATE A WORM!!! THAT.WAS.SO.TOTALLY.AWESOME!

then the oldest picks one up and EATS IT!

then the second oldest picks one up and EATS IT TOO!

me: what the?!i can not believe you guys just did that.

husband: you double dared them to.

me:WELL YEAH but i didn’t think they would REALLY do it!

both boys bouncing around super excited and chattering a mile a minute saying things like: “they aren’t going to believe we did it! we’re going to tell everyone mom dared us and we did it!!!! “WE ATE A WORM!!” (great all anyone is going to get from that is that I, THE MOTHER DARED THEM TO DO IT)

me: oh yeah what’s that?

husband: never double dare a boy into anything…because they have to do it.

me: hmmm i may have to remember that…

he later confessed that the first thing that went through his head when he put the worm in his mouth was “nope, i was wrong, i think i just read the book. i don’t think i’ve actually ever experienced this before”