V and Co @ quilt market and blogger’s meet up 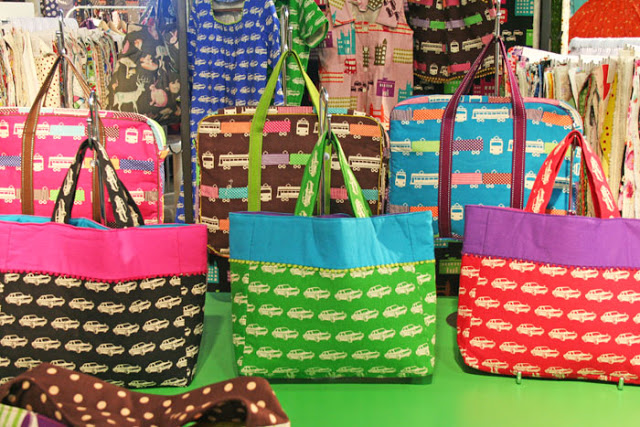 well well well. all i can say is that i’ve still not recovered from spring market (i didn’t even have a booth!), and like so many others have said…i still have a quilt market hangover. i can’t believe it’s thursday, and, can i just throw this out there… i can’t believe i’m moving in a week. 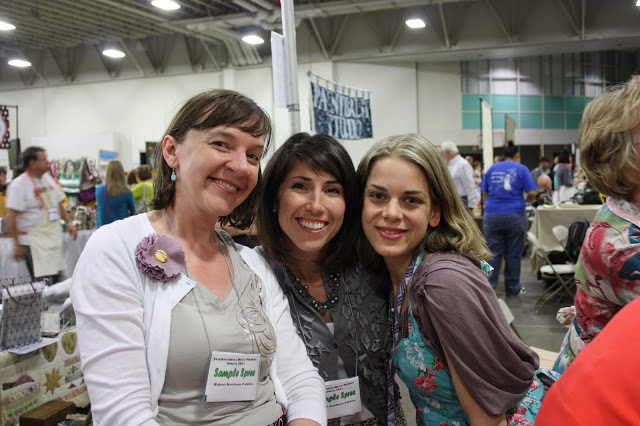 there is so much that happens and so much to process at market, that really you walk away with two things: a blurry memory of all the conversations you’ve had, and some really, i mean REALLY sore feet. (i have to have cute shoes on…i don’t care, i’ll shave the corns off later on in life when they show up)
here’s just a few encounters in pictures and some shady comments due to the fact that i didn’t take notes the whole time i was there so my memory is all kinds of messed up.

i was so grateful to be asked to work the robert kaufman table at sample spree. i’ve only gone one other time to sample spree and it was a sight to see…but to be on the other side of the table? OH MY GOSH. this picture of me, Amy of diary of a quilter and Julie of jaybird quilts was taken right before the doors opened…we weren’t frazzled and crazy yet. 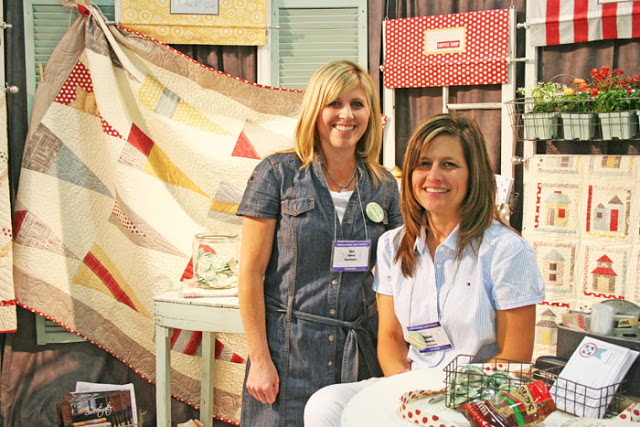 every time i talk to these two lovely girls, i’m pretty sure that if lived closer, we would totally be best friends.
sweetwater is one of my favortie fabric lines always, and this time they were once again…one of my absolute favorite. 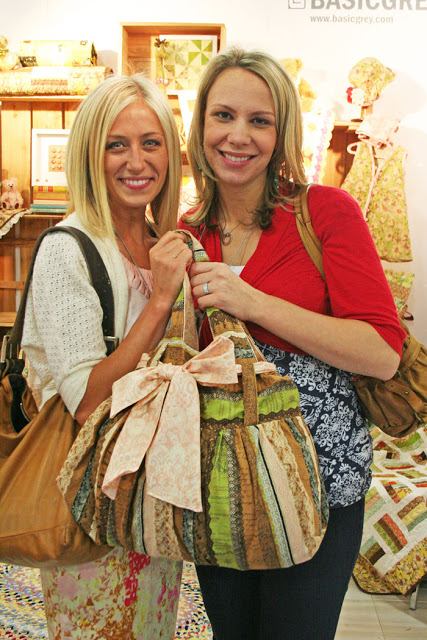 the basic grey girls holding up their abby tote bag they made with MY pattern. i think we were both so equally excited to meet each other (okay maybe me more than them) but i was super excited to see my abby tote in their fabric line and hanging out in their booth! 🙂 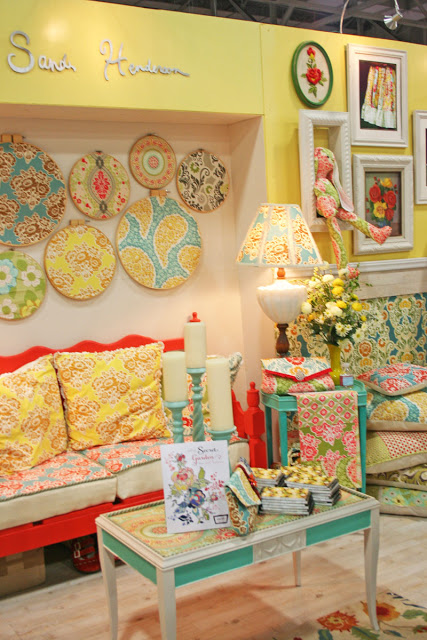 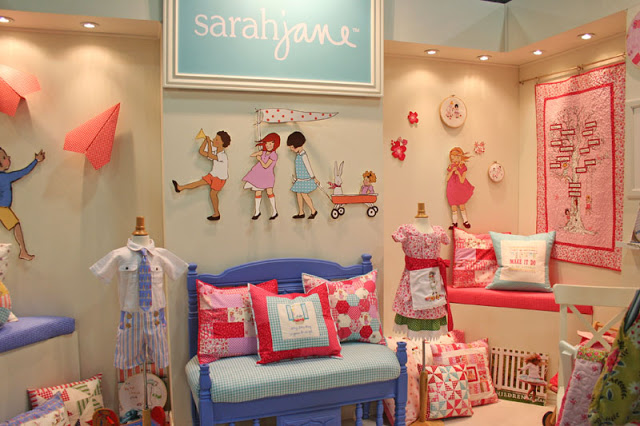 but i was so SO excited to see cute sarah jane’s new line. and she’s sooo nice and cute herself too. 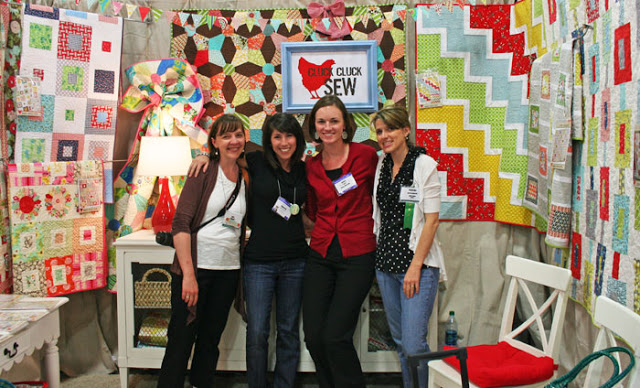 i def had to come by and bug al of cluck cluck sew. we exchange emails on occasion and she makes me laugh real hard. i was SO happy to meet her and hang out with her…like a ton.
also in the picture amy of diary of a quilter, and paige of Where Women Create and the The Creative Connection

then at some point in all the chaos we went to the bloggers meet up, that amy of diary of quilter and cami of make it do put on, i was asked to be the mic, and well after that i got a little over the top, and now i’m embarrassed of my actions and how loud i got. (also this is where i just so happened to jump miss paula prass, who is my “poop” partner. basically she and i bring up poop anytime we can.) ahem, i promise not to be that loud at the sewing summit get togethers. i’ll try to be a little more proper. oh who am i kidding, i’ll probably embarrass myself again and bring up poop in conversations. picture above is of amy, al of cluck cluck sew, and the DIY girls.

char of crap i made (is freaking hilarious) sabra of sew a straight line (she’s equally as funny)
me and kari of Ucreate and sachiko of tea rose home. hi girls! 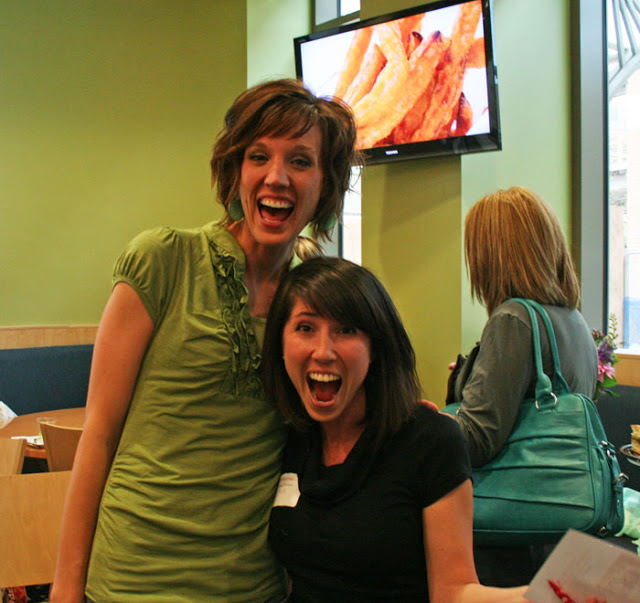 brassy apple was so… uh tall. and well she made me feel like i midget, yes i had heels, and lets just say she’s beautiful, and can make a pole feel fat. ‘nough said. 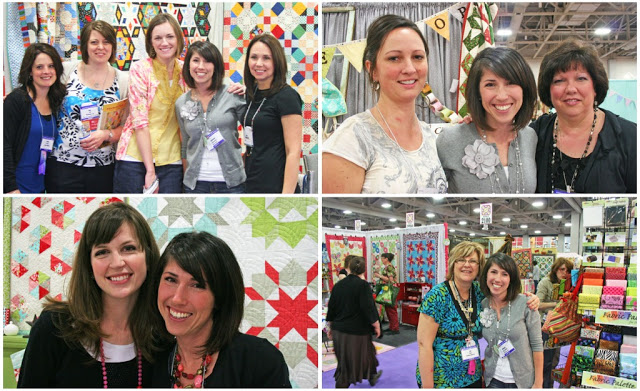 amber of a little bit biased, amy of amy’s creative side, allison of cluck cluck sew (see we hung out a lot), me, and erin of two more seconds (who i think is my sister but we just didn’t know it)
next picture: natalia bonner of piece n quilt and kim walus of bits and pieces (who were both in the moda bake shop book with me…and we’ll be signing copies of the books at a few locations in utah on june 4th! ask your local quilt store if we’ll be there!)
next picture: camille of simplify, who i got to hang out a whole weekend with like over 2 years ago and who i feel we always end in the middle of conversations, and then a year later…pick up right where we left off…in the middle of a sentence. 🙂 and then last but not least miss pat sloan who i divulged some pretty important information to… 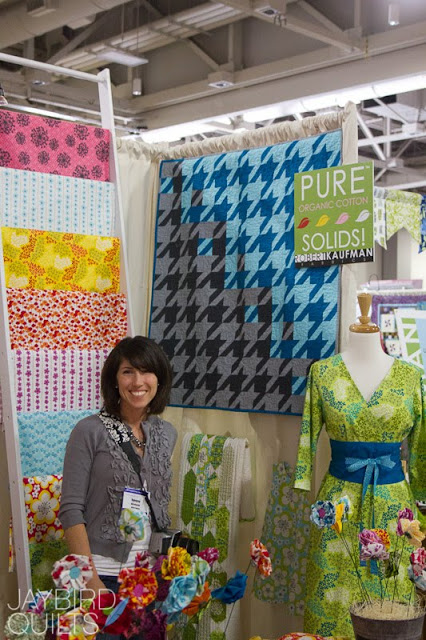 but one of the exciting things this market for me (thank you julie for the picture!), is to see my houndstooth quilt up at the robert kaufman booth. 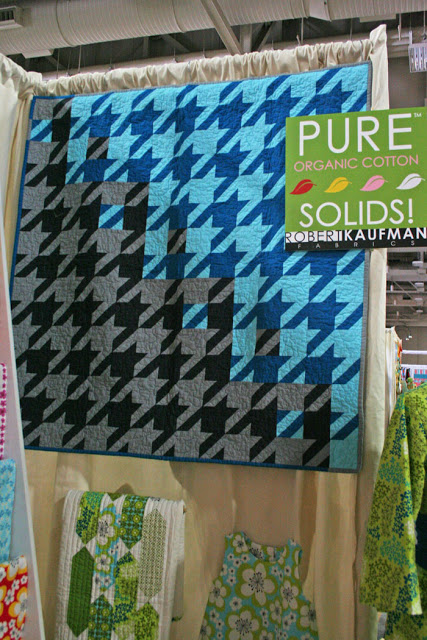 and yes, as per popular demand…larger version instructions are on it’s way. (fall) so you will be able to make this quilt in lap, twin, queen, and even king size.
and then the second big exciting thing: 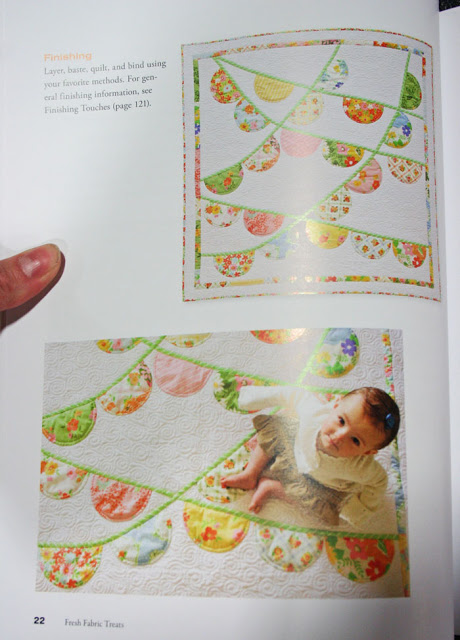 i FINALLY get to show you my quilt.
MY PROJECT in the Moda Bake Shop bookwhich btw i should be getting soon and able to send out the pre-ordered books to all of you! 🙂
sweetwater got a picture of me speaking about it at school house…but being the total dork that i REALLY am…i basically unfolded my quilt right there in front of everyone for the first time since got it back from the publishers…and well…it was one big huge waded up mess of a quilt. sigh. such a dork. oh well, i wouldn’t expect anything less from me.
okay i’m tired. i have some really super duper exciting news to re-share (some of you caught it already but for the rest of you i’ll leave it at that)…but that is for another day. soon though i promise.