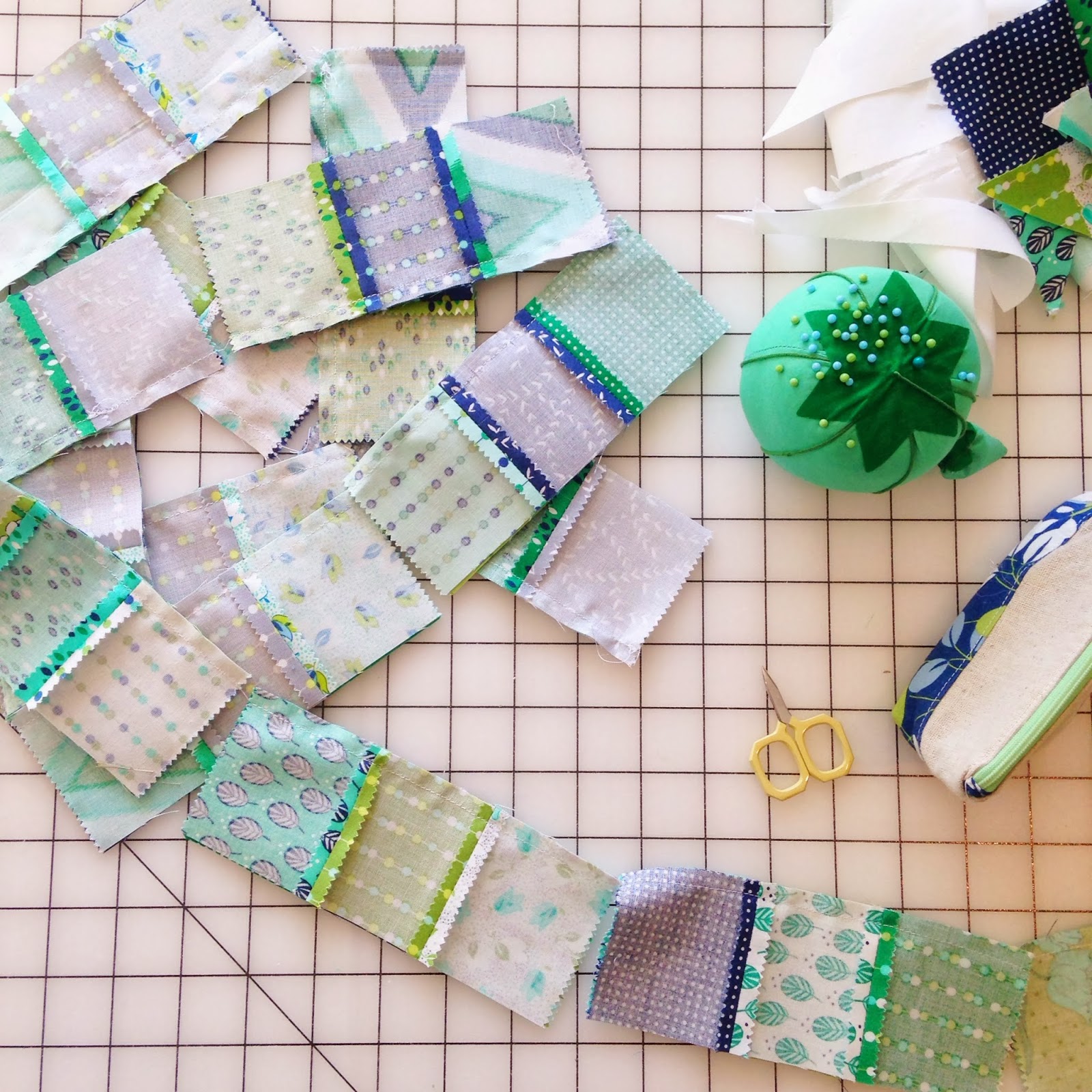 Well, I don’t know about you, but I’m a little over winter. This winter has been the coldest I’ve ever experienced no seriously…like…EVER…

I’ve experienced negative degrees before…but this winter we’ve  experienced negative degrees that made my past experiences childs play. We’ve been been in the negatives with -45 windchills. It’s insane. You would think that at a certain point it’s just cold and you don’t feel the difference but yeah…there’s a difference when you try to breathe in when it’s that cold.  Especially if you think you’re not going to be out there for too long and you don’t have anything covering your face when you try to breathe in. One time I walked outside when a friend texted that she was waiting in her car in my driveway.(cause duh it’s freezing why would she get out of the car?!) I walked out to get whatever it was that we felt so important that needed to be swapped during this polar vortex ordeal and I swear to you my whole body sphinctered up inside and out. It was like I walked out and every part of my body wanted to be inside of some other part of my body…including my lungs. I lost my breath when the wind hit my face and when I did finally take a breath I started to cough. Man, LUNGS BURN WHEN THEY’RE COLD!! I quickly learned my lesson that day.

I am never leaving my house every again in the winter months. period. End of story.  Okay so that’s not  totally true. I have gone out since that one day.

As a matter of fact a few days later…it was 0 degrees with windchill of -8 and I litterally walked to my mailbox in a long sleeve shirt and jeans, and actually looked up to the sky and thought to myself “Wow, it’s really kind of nice today.”

Did you see what happned there? Yeah, I think that’s what’s called “Becoming a midwesterner.”

I did get some virtual high fives “you’ve become one of us finally!” on Facebook…but somehow I am not as excited about it as they were. I’ll be excited to thaw out in June. 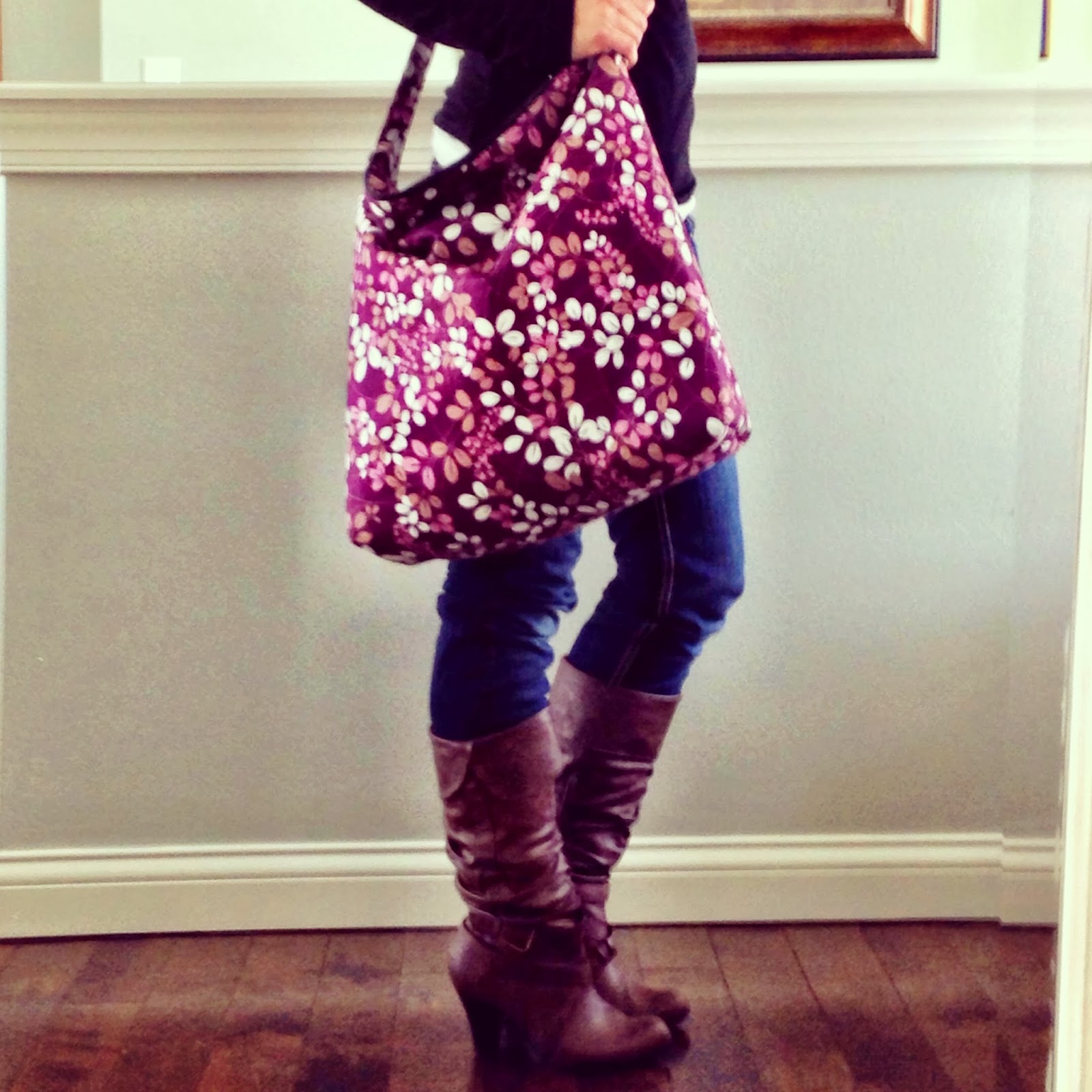 The good thing about it being this cold, is that A) we all have enough quilts to be under and we are truly feeling blessed for all the basics of shelter, heat, and blankets and B) I don’t want to go anywhere so when we don’t have snow days I’m spending a lot of time sewing and working on all the various projects I have going on all at once (and trust me it seems like theres like a bazillion at the moment)

One of the things I got to cross off my list of need to do’s was making my mom an extra large Hampton weekend Bag with a zipper instead of a snap closure. She wanted in my Simply Color eggplant fabric, and she specifically asked for a zippered top. I got that sent out to her and she happily says it’s perfect. PHEW!

Next on the chopping block is another how to for the Bernina Blog We All Sew. Its almost done and heading over that way soon. 🙂 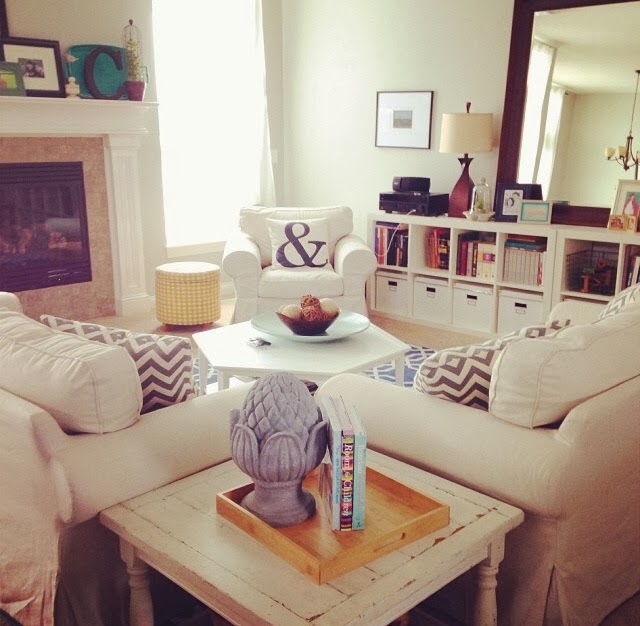 And well because a few of you requested I show off some of the decorating I’ve been doing in my home, here’s a picture of our living room. This house hasn’t really gotten completely decorated because I feel like we’ve been in limbo trying to save money from when the husband’s company he worked for closed it’s doors, and we were without a job for 6 months and had to use every single penny we had saved for instances like that…And now we have a new predicament…our house in middle of nowhere is back on the market. (paying two mortgages is not something we were foreseeing last year…but things happen, and well…yeah things happen.)

I still feel like we were sort of prepared for this financial issue…we have been trying really hard to save up again…just like we did the last time…and even though we’re not where we were a few years ago with our emergency funds…we have been able to get the ball rolling in the right direction. So, yes, we feel a little prepared…We at least have some funds saved that we are able to have the house be put on the market for a little bit without renters. That house was a great house…if I could transport it here I would in a heart beat. But unfortunately, I couldn’t bring the house or the people from there here. (Even though we have met so many new wonderful people here in the last 2 1/2 years and this new house is pretty sweet too)

We feel very blessed to have been able to be in that house for the small amount of time we were in it…and we are very grateful for the home we are in now…but seriously…I kind of only want to have one mortgage and only one house to worry about.

SO. With that word vomit out in the open…that’s all I’ve got for the day. I have to start baking like a madwoman…because we have a birthday this weekend. 🙂